The month of September is a special one for us here at African Hoopoe tours. We have a few things to celebrate. Our business was founded in 2007 and we turn seven this year. Also it would be exactly one year since we moved into our new depot with mixed successes along the way.

Spring is in the air and after completing our first flower tour we can really say that the flowers are out, though we still have cold weather with winter reluctant to loosen its grip on us. So it’s only appropriate us focusing on this tour in this feather feature. I had the privilege to do a flower tour with two professors in ecology from the University of California, Davis. I learned a lot about skinks, agamas, geckos and other lizards. Some species of lizard still yet to be identified. So it was not just the obvious flowers we were after but also lizards and birds. The study of ecology makes one aware of the interaction between different living organisms. Some flowers for instance will only open up in the late afternoon so that moths can pollinate it. Also new unpublished research I was made aware of showing how a certain bee is equipped to pollinate one certain flower by breaking open a certain oily pod. We went all the way up to Springbok and toured the nearby Goegap nature reserve an old favourite of mine. Amongst some lizards we also noted the ground whistling rat who celebrated the sunshine with other birds of the felt. Sasol’s LBJ’s (little brown jobs) really came to its own in identifying some bird. I was told not to use the bird calls on the cd to attract birds as this practice disturb the natural behavior of birds, so I am passing on this information to you the reader. We then visited Vanrhynsdorp briefly as there is to be found a very interesting succulent nursery with some rare plants. We then set off to Nieuwoudtville with its stunning waterfall and geophytes. En route to Kamieskroon we spotted a Marshall eagle a first for me on this route but a great delight to us all. Agama tented camp situated 10 km outside Garies proved to be just what we needed in the sense of tranquillity and bird watching. It’s situated on an 8000 ha cattle farm, a must for the nature lover. Clan William with its flower show definitely was a unique experience, well done to all the ladies that had a hand in it. Always a joy to stay over there and especially driving over the Pakhuis pass. We had a moment to reflect at CJ Leipoldts grave and could understand how he was inspired by the landscape. Finishing off the tour visiting Lambertsbay with it’s gannet colony and a visit to the West coast national park was a great way to end the tour. 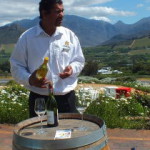 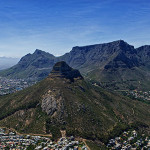 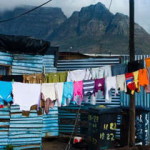